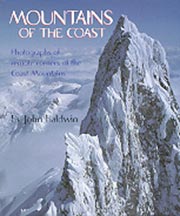 MOUNTAINS OF THE COAST

Photographs of remote corners of the Coast Mountains
John Baldwin

Along British Columbia's western edge from the Alaska panhandle to Vancouver stretches a vast alpine wilderness that ranks as one of the largest and least known on earth. Hidden in the mists beyond the head of long, dark inlets, this sea of mountains is so isolated that hundreds of major peaks remain unnamed and much of the territory was unexplored until the closing decades of the twentieth century. Vancouver mountaineer, John Baldwin, often teamed with his fellow climber John Clarke, has spent twenty-five years exploring and photographing this measureless wilderness, registering an incredible 250-plus first ascents and pioneering some epic ski traverses in the process. Together, Baldwin, Clarke and their teams have carried out a program of discovery that has few parallels in the history of mountaineering, and Mountains of the Coast allows the public to share the high points of their astounding experience for the first time.

Here are accounts of sudden blizzards, rumbling glaciers and month-long ski traverses over crevasse-mined icefields, side by side with peaceful scenes of alpine flowers and unexpected encounters with mountain goats and grizzly bears. Baldwin describes the careful planning that goes into each expedition, the special friendships that develop among dedicated climbers, and the thrill of being the first human beings ever to set foot on a remote mountain peak.

Most memorably, Mountains of the Coast unveils the severe beauty of these wild places, revealing page after page of unimaginably spectacular landscapes, many of which have never been recorded on film before. Mountains of the Coast is a breathtaking journey into an unknown world that will appeal to mountain climbers, outdoor enthusiasts and armchair explorers alike.

Excerpt from the Introduction:

"These are the Coast Mountains. They are the last in a series of mountain ranges between the Rockies and Pacific Ocean and form the first major barrier to winter storms sweeping off the Pacific... Their toes sit right in the ocean, and like the barnacles in the surf below they are constantly lashed with moisture from the sea. This moisture gives the Coast Mountains an incredible richness, sustaining large icefields in close proximity to lush rainforests. For many people the Coast Mountains are a symbol of the great wilds of BC and a scenic splendour to be admired from a distance. For me they are part of my backyard, and the wish to discover what lies beyond these mountains that form the backdrop of my daily life has been my lifelong passion."

Mountains of the Coast was shortlisted for the Bill Duthie BC Bookseller's Choice Award as "one of the three best works published in British Columbia in 1999".

"For the past 25 years John Baldwin has walked, climbed and skied these mountains and taken photographs of them. His pictures amaze me. A friend noted that the sensation they induce is usually thought to have disappeared by the mid-19th century: an awareness of the philosophical sublime."
Bruce Serafin, The Vancouver Sun

"...Mountains of the Coast...describes the true feeling of what it's like to experience the joys, excitement and hidden treasures' of the Coast Mountains. ... vantage points for the many stellar photographs which illustrate Baldwin's book. This book will kindle the spirit of adventure, pique your sense of discovery and render a preview to the natural beauty of the rugged Coast Mountains."
Greg Maurer, Coast Magazine

"Baldwin sorted 8,000 slides to present dramatic high-altitude images of a BC few know. He revels in the emptiness of wilderness and the simple joy of nature. His book puts life's molehills into perspective."
Neville Judd, The Vancouver Courier

"..captures glorious photographs that only the serious mountain climber would ever get to see, viewed from the safety of your living room armchair."
Annie Boulanger, Burnaby Now

"Mountains of the Coast is a spectacular visual and intimate personal journey into a realm that few have explored."
Paula Wild, Comox Valley Record